This weekend my box hosted a competition called Tuff Love. 90+ people from boxes all over Colorado, as well as a couple from New Mexico and I think one from Wyoming, showed up to compete at a pretty elite level. The competition was a boy/girl team event, so there were about 45 teams total. We had 9 teams from my box compete, a couple of whom had never competed before but kicked some major ass! The competition had three events, “First Date”, “Second Base”, and “Walk of Shame”. 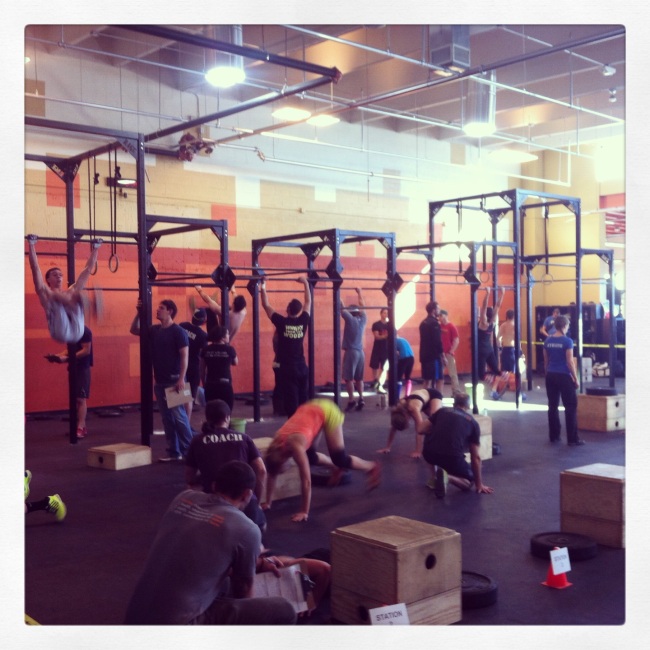 “Second Base” was a clean and jerk ladder complex, with 1 power clean, 1 hang clean, 1 squat clean and 1 jerk, all done without putting the bar down. There was one woman who kicked complete ass and got up to 195. 195. I was so impressed. A couple of our girls PR’d, including one girl who double PR’d, which is incredible after having already tired herself out going up the ladder and with having to do three cleans! She had a whole bunch of people from our box cheering her on and she said it helped push her through.

I love CrossFit competitions for so many reasons, but one reason in particular is the support that everyone gives all of the athletes. This especially showed on this ladder.  As athletes got higher and higher in weight everyone came forward to cheer them on, not just their own teammate. When the woman who got 195lbs attempted 205, the whole box erupted to cheer her on and help her shake it off when she didn’t make it.  When one of the guys went for 265 and got it, everyone cheered, even his competition. I love that.

I also love CrossFit Comps because I find them so incredibly inspiring. Seeing people push past that “dark place” where they feel they can’t go on anymore, to keep going and truly dig deep to give it their all. All those months of hard work paying off. The look on their face when they finish and are proud of what they accomplished. I find it truly moving. The couple that ended up winning it were recent additions to my box, after having moved from a different box in Boulder. The female qualified for the games last year, but couldn’t go because of her work (she’s a marine). Watching her do butterfly pull ups was truly beautiful. She moved so gracefully and so fast, we all just watched her with our jaws dropped to the floor. It was also great to see just how proud of her her boyfriend was (who is also ridiculously good at CrossFit). I love seeing couples that are that supportive and proud of each other.

Two girls from my box asked me this weekend if I wanted to do two different competitions with them in may. My response was that I don’t have pull-ups, doubleunders or hand stand push ups solid enough to compete. But, I’m gonna try hard as hell to get them up to par by April (at least enough to qualify to compete) and I would let them know. By Apri 1st my goal is to have 10 pull ups, 20 double unders strung together and at least 2 hand stand push ups. I am not quite sure if it’s possible, but this weekend really made me want to get out there and give it all so I’m gonna do all I can to get there.

What motivates you to compete?

What sport/type of competition do you like watching best?

I did it. I competed in my first ever Olympic Lifting Competition. I waited a couple days before writing about it so I had time to reflect on the experience. I know that I have a habit of being very hard on myself, especially if I don’t live up to my high expectations. To cut to the chase, I didn’t PR at the comp, nor did I hit weights I had previously hit. I was surprised by how incredibly nervous I was, how much I got in my head and just how much it affected my abilities. I was pretty upset at myself at first, but after spending some time thinking about how far I had come in the past couple months I decide beating myself up wasn’t productive and it was better to be proud I had taken the risk and just focus that energy on further gains instead of negative thoughts. 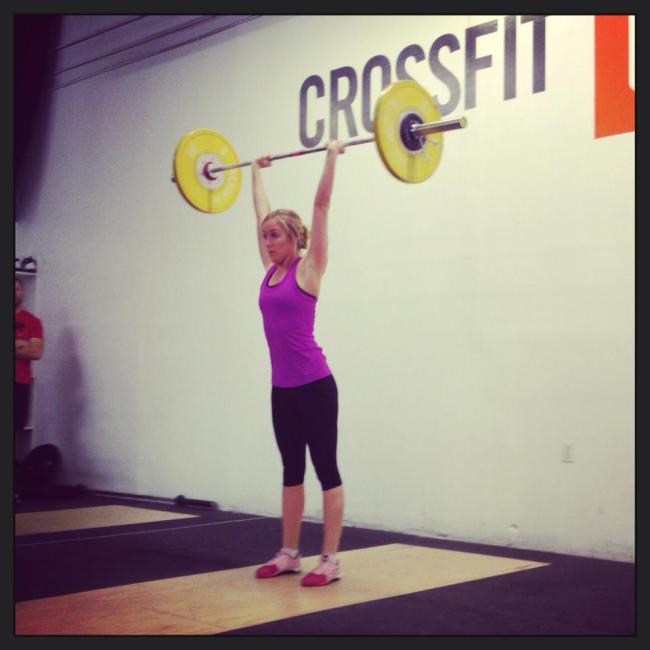 I got to the box that the competition was being held at at 8:30 for registration check in and weigh in. We lined up as they weighed us, confirmed our starting lifts and wrote it all down on a card. Maybe it’s just because I have a history of distorted body image, but I loved the fact that all of the women weighed in and had their weights said out-loud without batting an eyelid. I remember a time where stepping on the scale could make or break not only the day, but the whole week. To be surrounded by women who didn’t care what the number was and finding myself to be one of them was empowering.

Next I hung around with the two girls from my box who were also competing. They were definitely in a class above me, really strong girls and very inspiring. We did a typical Oly stretching warm up followed by individualized barbell warm ups our Oly coach had written for us depending on our starting lifts. They consisted of: good mornings, front squats, press, overhead squat, jerk, rdl and cleans (all with just the barbell). Then we slowly added weight doing 1-3 reps until we reached 5 lbs below our starting weight.

They organized us from lightest start weight to heaviest. For the snatch I was 4th from the top, for clean I was 8th from the top. For each lift you stand on a stage, in front of a room of people in dead silence. There are three judges in front of you who determine whether the lifts counts or doesn’t by flashing a red or white card. You get three total chances at both the clean and jerk and the snatch. I missed the first attempt (what should have been very light) at both the clean and jerk and the snatch because I was so incredibly nervous. Both of them I missed because I didn’t lock out my arms at the top, but instead got the weight up with a bend in my elbows and finished by pushing it overhead until my arms were straight.  I got stuck at 70lb snatch and 110lb clean and jerk, neither of which were what my current PRs are. That was frustrating, but once again I just have to keep reminding myself it was my first competition and, hopefully, the next one will mean less nerves and more PRs.

A lot of people came to watch, both from my box and my coworker and the girl I used to workout with prior to joining crossfit. It was really nice to have all that support and people to distract me in between lifts. It also felt really great that they could have been anywhere on a nice saturday morning and chose to come cheer us on. Gotta love the CF community.

Originally they said that I had gotten 8th place (out of 18), but they later sent out an email correcting themselves and bumping me down to 11th. Another little bummer moment, but moving on from that. Now it’s time to focus on new goals. I want to get my “engine” in better shape. I went trail running the other day and died and I’m determined to go back and run the same loop in a couple months and have it not be a problem. As of now there are no competitions on the horizon (running or lifting) for the first time in like 7 months. I’m sure that won’t last too long though. I love having those goals to push me in my training.

How was your weekend?

What motivates you to work harder?

Five Days. 5. That’s all I have until my Oly Comp. I can’t believe it’s finally this close. I am incredibly nervous and get knots in my stomach just thinking about it. Two and a half months ago when I decided that I wanted to make this a goal, I had snatched an empty bar twice, had never jerked and was cleaning 80lbs. I know I have come a long way, but it’s hard to focus on that instead of how much further I have to go. I’m hoping this competition just sparks more of an interest and isn’t discouraging. 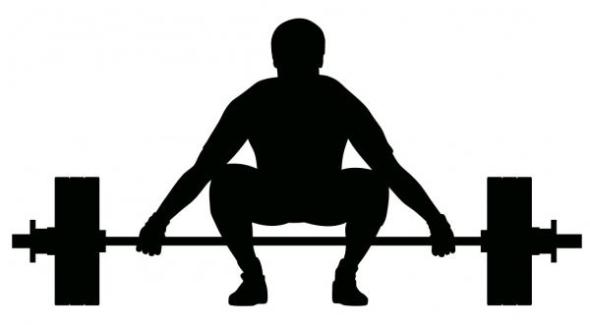 I have to submit my starting and attempt weights by Wednesday evening. You get three chances at each lift and I’m still not 100% sure what I want to go for. I was talking to my Oly Lifting Coach today, trying to figure out where to start/what to attempt. He’s gonna come up with a warm-up plan for me Saturday and he wants me to not go heavier than 60% of my max weight during practices this week. It’s really hard to stick to that weight, I’ve gotten slightly addicted to trying to go heavier and heavier. But I know it’s best to let my muscles rest a bit, and I’ll probably focus more on running/hill sprints to get my energy out while going light.

One thing I’ve gotten used to while prepping for this Oly Comp is being constantly bruised. If you follow me on Instagram then you may have seen the pic of my bruised and tattered legs. Every time after I jerk and I bring the bar down, I catch it slightly with my legs to absorb the weight. This means lots of little bruises above my knees from receiving the weight. Also, bruised pelvic/hip bones from thrusting during snatches.

Bruises on my collar bones/shoulders have also become the norm from receiving the weight during cleans. I’ve been promised these bruises will stop happening as much once the scar tissue forms and I have to admit I am looking forward to that day so I don’t look like I am getting beat up on the daily.

The rest of this week I just need to focus on mobilizing, improving form with light weight and visualizing getting a new PR. And not vomittng from nerves when I step on the platform, thought that’s really out of my hands.

How do you deal with the nerves?